"I see CrossFit as the gateway to helping me get my life back." 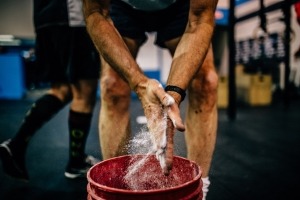 How long have you been doing Crossfit?
About 8 months now!

Who or what persuaded you to try?
In February last year I was 32 stone! After being generally fed up and after hearing some harsh but caring and fair truths from friends I finally woke up and realised I needed to change my life drastically! I managed to change my diet first of all and lost a bit of weight stone but I knew I needed to get serious, step it up and add some exercise. It was Ainsley who convinced me to come and see Arend one Sunday afternoon and I originally started just doing the half hour hiit classes with him! It was the first real exercise I had done in years so was a real shock to my system! The first week my body was in so much pain! But good pain that actually somehow got better the more I worked out! Soon after my first session Arend suggested I started coming to the full CrossFit classes and 7 stone and 10 months later I haven’t really looked back and am the fittest and strongest I have been in years!

How often do you usually WOD a week?
I started trying for a minimum of 3 times a week but the past few weeks I’ve stepped it up to between 4-5!

What did you think of Crossfit before you started doing it? Has that impression changed?
Honestly, I thought it was just a fitness fad for already uber fit people to boost their ego’s some more! I wasn’t really an advocate for exercise of any sorts 12 months ago let alone what looked like tough competition style exercise to see who was the best at it!

That impression has now completely changed of course! CrossFit is genuinely for anyone, regardless of age or fitness ability! Especially at CrossFit dawn! There are people of all abilities and ages in all the classes and it’s become a really fun, relaxed super friendly community! Think Average Joe’s in dodgeball!

What keeps you coming back each week?
Obviously I am still on my journey trying to sort my life out, but that’s just an added bonus now to be honest! Scarily I think I actually really enjoy it now! I still dread walking up to the white board every session don’t get me wrong! But as horrifically cliche as it sounds, the fun I have and the people I hang out with there help alleviate that fear very quickly!

Did you have a sporting background before? If so what? If not, what’s different about Crossfit?
Yes a long time ago though! Back in school I played every sport imaginable, and I wasn’t that bad at them either! But then I broke my foot, finished school and after a number of various other ‘excuses’ just spiralled into the most unhealthy and sedentary lifestyle possible! I see CrossFit as the gateway to helping me get my life back and will hopefully also help me get back into other sports! I have already started playing some tennis and badminton! I can always see CrossFit being a constant in my life from now on though whatever else I do!

What’s been your favourite favourite workout / exercise so far?
Hard to pick a favourite as it’s so varied I rarely remember the names or what I did! My favourite exercises though are deadlifts and kettlebell swings mainly because I am half decent at them! But I really enjoy anything using the bar and also do ‘enjoy’ rowing occasionally!

What’s surprised you about Crossfit?
How unpretentious and down to earth it and the people that do it are! There are no snobs that get annoyed when it takes me 5 minutes longer to do the same workout they’ve just finished, in fact it’s the total opposite, the athletes at CFDAWN stay and cheer me along till I finish! I’m also surprised how quickly you pick everything up and the speed in which you seem to get hooked on it all!

What do you hope to achieve with Crossfit in 2017?
2017 will be the year I fully take back my life! I will get to my targeted healthy weight and have the body and fitness levels I could only have dreamed of for the last few years! I say that confidently as well as I intend to keep CrossFitting and keep up my new found lifestyle which means it will happen!

The improvement I have seen already in just over half a year is drastic! I can now do a few proper push-ups, proper sit-ups and in the last few weeks I have even managed to start doing something that roughly resembles a proper burpee!! All things that once seemed impossible to me!

I want to keep getting fitter and stronger and who knows, I may even hopefully rediscover my competitive edge and get involved in some of the upcoming competitions that are planned!

If you could give only one piece of advice to a new crossfitter what would it be?
Take a deep breath, drag yourself along and turn up that first time whatever it takes! Going along to my first ever session was one of the hardest things I have done! I was full of anxiety and fear of embarrassing myself with my disgraceful lack of fitness. All of that was gone within minutes of first talking to Arend the head coach and doing my first few squats of course!

We'd love to send you information about our pricing

Enter your details below and we'd be happy to show you our rates and explain them in detail!